In this research we aim to propose a new efficient approach to the problem of multi-agent area coverage where the structure of the map is known to the robots and the robots have a limited visibility range meaning that they cannot detect objects located outside the visibility area. In this project we mainly apply computational geometry concepts and algorithms such as Constrained Delaunay Triangulation and Visibility Graph in order to build a roadmap which can be used by the robots to cover the entire area.

In this project we propose a mechanism for visually covering an area by means of a group of homogeneous reactive agents through a single-query roadmap called Weighted Multi-Agent RRT, WMA-RRT which is a variation of Rapidly-exploring Random Tree (RRT) roadmap. The agents do not know about the environment and the roadmap is locally available to them. In accordance with the swarm intelligence principles, the agents are simple autonomous entities, capable of interacting with the environment by obeying some explicit rules and performing the corresponding actions. The interaction between the agents is carried out through an indirect communication mechanism and leads to the emergence of complex behaviours such as multi-agent cooperation and coordination, path planning and environment exploration.

Fazli, P., Davoodi, A., Pasquier, P. & Mackworth, A. K. (2010) “Fault-tolerant multi-robot area coverage with limited visibility.” In Proceedings of the International Workshop on Search and Pursuit/Evasion in the Physical World: Efficiency, Scalability, and Guarantees, Internationale Conference on Robotics and Automation (ICRA 2010), 2010. 6 pages. 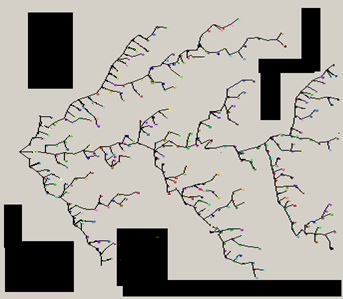