Spanish: To Assemble; put together) was composed by Kinetic Engine, a real-time software system created by the composer that uses multi-agents to create complex polyphonic ensemble rhythms. Armar also uses a genetic algorithm to evolve a population of rhythms that are derived from an analysis of source material, in this case, Afro-Cuban music. It then used these rules to generate its initial population. Each “parent” rhythm was then analysed again to generate new rules for subsequent children, all during performance. Each movement was “performed” live in the composer’s studio, and the output was recorded in a music notation program, with only minor editing by the composer (AE)

Three Note Oddity is a dialogue of sorts between a percussion trio and Kinetic Engine. One day, I stumbled upon a ‘phantom number’ being generated by the program, one that served no apparent purpose, until, purely by way of an accident, it started triggering MIDI notes. Three different ones.These three-note melodies , which consisted always of the same three pitches, became an integral part of the piece. Number stations are non-licensed short wave radio stations broadcasting mysterious messages, such as voices reading only streams of numbers, letters or words. There are many such transmissions, in many different languages, and no one is certain of their purpose, though it is assumed that the broadcasts are covert messages between intelligence agencies and their spies ‘in the field’. The Three Note Oddity is one of these stations, thought to be of Hungarian origin (KDD).

Composed using the new version of my ManuScore software, factura was written primarily as a test of online generation from the “MusiCOG” cognitive architecture —the music learning and generation engine of the system. Several sections of the work are based on passages of real-time generation, which were subsequently edited into the final form of the piece. MusiCOG was trained on MIDI files from three of my previous works, vovere, limina, and invidere (JM).

And One More is part of an ongoing series of works which explore the notion of composition through negotiation. In these works, a general compositional environment is created, and multi-agents explore this musical space, negotiating their way towards a musical cohesion. In this case, the goal is to arrive at a mutually agreeable rhythmic polyphony, with negotiated parameters of volume, density, onset placement, and variation, with the added interest of the human percussionist acting as one of the agents: the human’s improvised performance is translated into machine terms, and the agents treat him as a silicon performer (AE).

A tongue-in-cheek homage to Karlheinz Stockhausen’s famous total-serialist work Klavierstück XI, in which the performer glances at a sheet of music and randomly chooses to play from 15 notated fragments. In this case, agents negotiate a texture – from 16 possible combinations – based upon the following features: slow/fast; sparse/dense; loud/soft; rhythmic/arhythmic. When the same texture has appeared three times, the performance is complete. Unlike all of my other multi-agents works, Roboterstück makes no attempt at anything human-like, either in conception, or performance by the NotomotoN (AE).

this printer…is a generative graphic video score. In line with the notion of metacreation, I have attempted to encode a certain ‘musical intelligence’ into the ‘printer’ – a software program that not only generates the macro form of the piece, but is also responsible for the behaviour of each of the various graphical elements presented to the musicians. Even though these ‘graphical textures’ are in themselves simple, there is a rich expressive range inherent in each of them – size, colour and the rapidity of emergence/disappearance of elements can all be controlled in different ways to suggest various types of musical material. As with most generative works however, this only becomes apparent with repeated performances (KDD).

This work uses the same system as And One More, albeit using pitch material. Importantly, the agent’s output is translated into musical notation on the spot, and the musicians perform the music live. Although the goal was to have true real-time composition and performance, this was not technically possible; instead, agent performances have been recorded prior to this performance, and a “curator” agent selects from this database of recordings, assembling several movements for this performance based upon musical criteria that it feels relevant (AE). 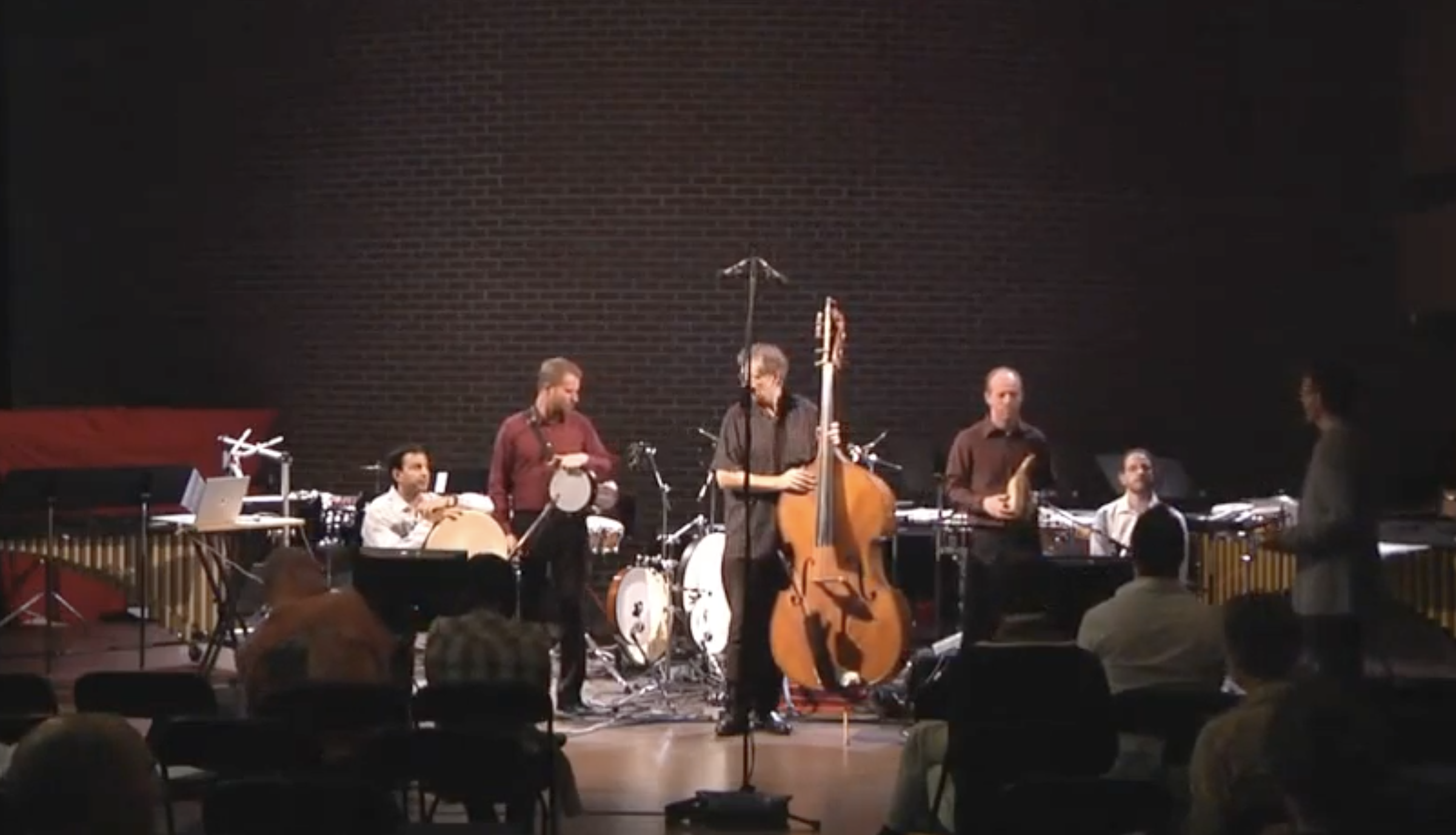